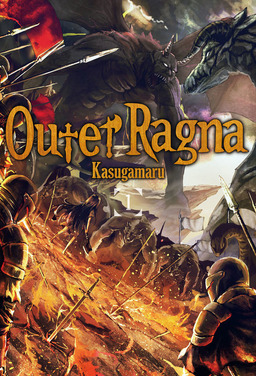 PotatoStarch, a streamer who's gaining popularity for his excitable attitude and witty banter, has begun streaming Dragon Demon RPG-DX, an unreasonably difficult game. When he ""possesses"" his character, Chloe, his fate unexpectedly changes forever.

PotatoStarch, a live streamer who's gaining popularity for his excitable attitude and witty banter, has begun streaming Dragon Demon RPG-DX, a game with a cult following known for its extreme difficulty and unreasonable systems. Only masochists would play it.
Meanwhile, in the world of the game, a fierce war between humans, elves, and vampires is reaching its bloody peak. The humans, lacking in magic, were forced into a defensive battle--until a savior appeared. Wielding a battleaxe, a young girl named Chloe stepped forth to oppose both enemy armies. Her heroic efforts earned her the names ""Dragonslayer"" and ""Killer of Demons."" Thanks to Chloe, a girl ""loved by God,"" humans counter-attack.
PotatoStarch is just a video game player. He dives into this world hoping to forget the tiring real world. But through an unexpected series of events, he ends up almost ""possessing"" Chloe. As he reaches the game's climax, Chloe discovers a mysterious power and PotatoStarch's fate is changed forever.

Recommendation for customers who viewed this eBook