Campfire Cooking in Another World with My Absurd Skill: Volume 12 - Light Novels 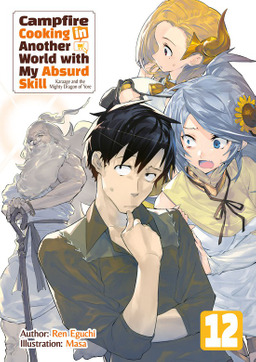 Another day, another dungeon! Or rather, another day, the same dungeon, because after barely a moment's rest on the surface, Mukohda's familiars have dragged him right back into Brixt's most famous hellhole for another stab at action and adventure!

Another day, another dungeon! Or rather, another day, the same dungeon, because even though Mukohda would much rather make the most of his mid-dungeon break by lingering on the surface and enjoying a breath or two of outside air, a certain trio of battle-happy gluttons have dragged him right back into the depths again! Fel, Sui, and Dora won't be satisfied until they conquer every last floor that the Brixt dungeon has to offer, and the most Mukohda can do is grit his teeth and tag along for the ride.

But hey, it's not that bad—after all, if the first forty floors were simple enough for Team Familiar to steamroll through, then surely the next who-knows-how-many won't pose any dangers or inconveniences either, right? And it's not like there are any horrible primeval monsters lurking somewhere down there that everyone—except for Mukohda—has forgotten the gods specifically warned them about, right?!

Pre-order and get coin boost!

Other customers have also pre-ordered